From Awful Movies Wiki
Jump to navigation Jump to search

An example of a pirated movie (no puns). 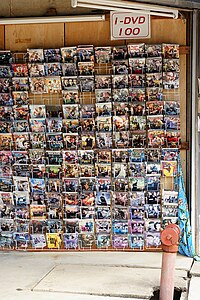 An example of the image depicting pirated DVDs in a vendor in Thailand.

Movie piracy is the act of illegally copying a movie onto another format and distributing it.

How to spot a bootleg

These are the signs of a bootleg movie on DVD or on VHS:

While watching a bootleg movie on a DVD or on a VHS, there are noticeable things you will notice: