All About Steve is a 2009 American romantic comedy film directed by Phil Traill that stars Sandra Bullock (who also produced the film), Thomas Haden Church, and Bradley Cooper as the eponymous Steve.

Mary Horowitz writes crossword puzzles for the Sacramento Herald. She's loquacious to a fault. When kids at a career day make fun of her for being single, she accepts a blind date with Steve, the cameraman for a CNN-like news network. Within minutes she decides he's the man for her. He's quickly put off by her constant verbiage and over-the-top advances; he makes an off-hand remark about going on the road with her, and splits. She's moonstruck, writes a sappy crossword puzzle, loses her job, and decides to follow him as the news team crisscrosses the Southwest; Steve's team eggs her on. Then she falls in a mine shaft, and she and Steve become a story; is it a love story?

All About Steve was panned by critics and audiences and was a failure in the box office. Rotten Tomatoes assigned the film a rating of 7% based on 135 reviews, with the sites consensus stating: "All About Steve is an oddly creepy, sour film, featuring a heroine so desperate and peculiar that audiences may be more likely to pity than root for her." Another review aggregator, Metacritic, gave the film an average score of 17/100 based on 27 reviews, indicating "overwhelming dislike". All About Steve opened at #3 behind the previous two weeks' #1 openers, The Final Destination and Inglourious Basterds with $11.2 million. The film grossed $33.8 million at the North American box office and has a worldwide total of $40.1 million. 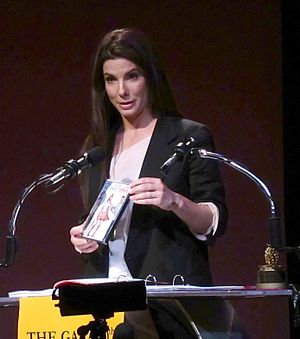 The film was nominated for five Golden Raspberry Awards in 2010, including Worst Picture, Worst Director (Phil Traill), Worst Actress (Sandra Bullock), Worst Screenplay (Kim Barker) and Worst Screen Couple (Sandra Bullock and Bradley Cooper). All About Steve ultimately won Worst Actress and Worst Screen Couple. Sandra Bullock accepted the Razzie for Worst Actress, giving out a copy of All About Steve to each member of the audience, promising to attend next year if they all watched to consider if it was "truly the worst performance". When an audience member thanked her for the copies, Bullock replied "You say that now". She won an Academy Award for Best Actress for The Blind Side the next day, making Bullock the first performer to win an Academy Award and a Razzie Award in the same year. She also won a Golden Globe for The Proposal.

Retrieved from "https://awfulmovies.miraheze.org/w/index.php?title=All_About_Steve&oldid=202557"
Categories:
Cookies help us deliver our services. By using our services, you agree to our use of cookies.